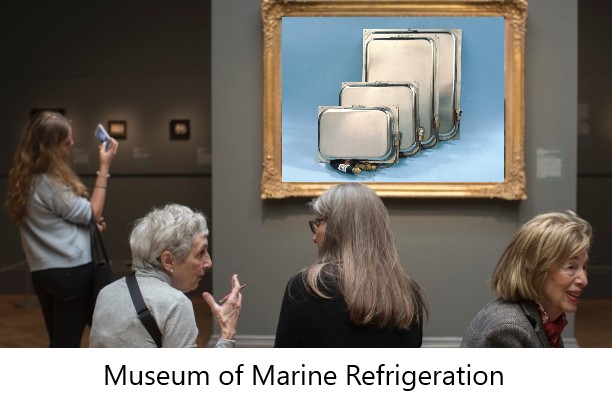 And so it came to pass that the days of the holding plates in marine refrigeration systems has come to an end. Amen to that! 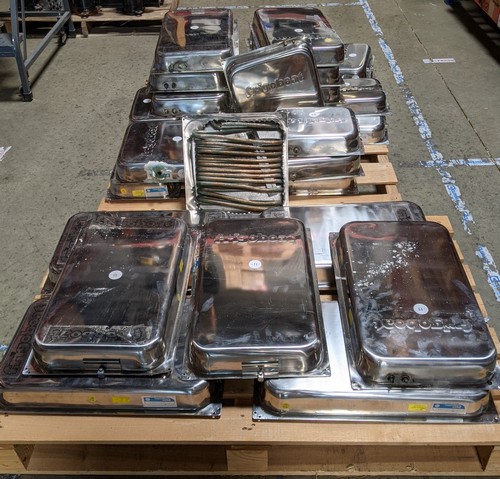 Our “collection” of these expensive, heavy, and cumbersome hunks of stainless steel is now destined for the scrap pile. This long overdue but necessary move will free up valuable warehouse space for more of the aluminum flat-plate evaporators that have all but replaced the holding plate.

But for those of you unfamiliar with these items we should look at what exactly a holding plate is/was.

Holding plates are basically a tank containing a solution that is designed to thaw at a particular temperature. Included also is a coil of tubing through which a refrigerant circulates at very low temperatures when the refrigeration system is running.

Developed primarily for the trucking industry, the concept decrees that a powerful refrigeration plant freezes the solution in a relatively short space of time, which would then thaw out at a stable temperature over the course of the day when the truck is out on the road.

When originally adapted for boat use, holding plates would be sized, somewhat mystically, for the solution to thaw out over the course of 22-23 hours, keeping the insulated space at a fairly stable temperature as either a fridge or freezer.

Then a powerful engine-driven compressor would be run once a day to re-freeze the solution in 1-2 hours, during which the batteries would also get their daily charge. A second coil was often included inside the holding plate to be hooked up to a mains-driven compressor for use when at the dock. Later adaptations included powerful 12/24v DC compressor units for use as a single system, operating from a big alternator (12v compressor units pulled 40+ amps) when the engine was running, or from a battery charger when on shore power.

If you wanted a decent refrigeration system on a boat, especially with a freezer, before the mid ‘90’s it would have been a holding plate system by necessity. The small DC compressors available back then were fine for small applications and intermittent use, but a serious cruising vessel would need something more substantial.

We used holding plates back then not because we wanted to, but because we had to, and I installed countless numbers of them, two or more systems in a week at times.

But then in the early ‘90’s, Danfoss (later Secop) introduced the BD 35 and BD 50 variable speed DC compressors that were more powerful and more efficient than their predecessors, and the whole scene changed. Using BD compressors and flat aluminum roll-bond evaporator plates, we could then do everything we previously needed holding plates for, and with less complexity, less bulk, higher efficiency and reliability, and at far less cost.

Plus, there was no requirement to run these systems on a routine with a timer, as a simple thermostat would ensure stable box temperatures.

A routine? Holding plates should be run on a timed routine? Yes. The whole purpose of a holding plate is that the solution is allowed to gradually thaw before then being re-frozen, and that dictates running a timed routine. Employing a thermostat on a holding plate system may be a convenience for the operator, but doing so negates the whole point of having a holding plate in the first place. As such you have a big, expensive, bulky tank of frozen liquid that is never allowed to thaw, so what’s the point of installing one? You’d be far better off with a flat evaporator that would be more efficient, although admittedly not as bright and shiny and as rugged as a holding plate.

The question remains, why are some manufacturers still offering holding plate systems? Simple. Because some customers want them and there are manufacturers that seize the opportunity. Some are of the mindset that holding plate refrigeration is the only “proper” refrigeration, and that they are getting something extra-special. But using holding plates with Danfoss/Secop BD compressors controlled by a thermostat makes little sense, and fancy gizmos that monitor battery voltage etc. simply vary run times and box temperature with little to no energy savings.

So how do holding plates compare to flat aluminum evaporators when powered by a Danfoss/Secop BD compressor?

With an aluminum flat-plate evaporator, when the compressor is running, the R134a refrigerant is circulating within the channels, boiling away (evaporating) at somewhere around -10 deg F, sucking heat very efficiently out of the box directly through the aluminum channel wall. In a similar installation but with a holding plate, the refrigerant is evaporating in tubing that is sitting in a liquid inside a stainless steel tank. The refrigerant is now having to remove heat through the walls of the tubing from a solution, which in turn is removing heat from the box through the stainless steel tank walls.

That’s double the number of heat exchanges, with the final one being through a very poor conductor of heat that is 17 times less conductive than the aluminum evaporator equivalent. Apart from the obvious difference in efficiency between the two, the holding plate compressor will be working on a very different cycle, running for possibly hours at a time and then idle for extended periods.

With either scenario, there is a certain amount of heat entering the box that must be removed by the refrigeration system to maintain desired box temperatures. Whether the system is running almost continuously, removing heat at the same rate it is entering the box (flat plate evaporator with variable speed compressor), or cycling with long compressor run and rest periods (holding plate at maximum compressor speed), the same amount of heat needs to be removed. The difference between the two is in the overall efficiency of the systems, and guess which one will remove that heat most efficiently and with the least energy use. 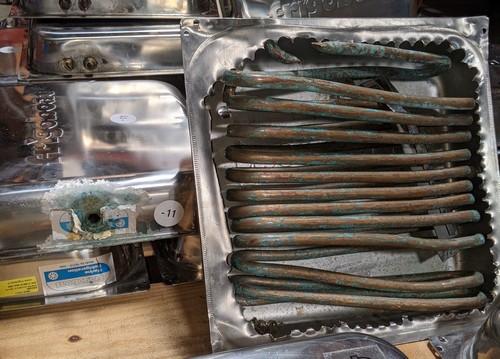 There are differences between different manufacturers of holding plates too. The Frigoboat holding plates featured high-conductivity copper tubing immersed in a brine solution inside a stainless steel tank. The salt-water brine is a true eutectic solution, which means that it will thaw at a stable temperature, and this is set by adjusting the salinity according to the desired box temperature.

Some holding plates utilize a glycol antifreeze solution, which tends to promote unstable box temperatures as the water freezes out of the solution around the tubing first, leaving the solution more concentrated and with a higher freezing point.

Now, a brine solution is highly corrosive stuff, and normally the copper tubing would have corroded away before long, but the people at Frigoboat in Italy used a clever little trick to prevent that happening. Some holding plate manufacturers relied on pulling a vacuum inside the plate to eliminate oxygen and prevent corrosion, but Frigoboat used a little of something that Italians know a lot about: food. Corrosion would require the presence of oxygen to eat away at the copper tubing, but by including a chunk of iron “food” inside the plate, any residual oxygen inside the tank is soon expended by it gobbling away the iron tidbit and causing it to oxidize (rust). Simple, but highly effective.

So there we have it. Anyone wanting one of these holding plates for an anchor or museum piece is out of luck. We emptied the brine onto the parking lot in a frigid spell during the winter to add to that put down by the snowplows, and we’re about to chop up the plates and separate the copper and stainless steel. Then it’s off to the scrap yard, and the proceeds will go into the kitty for the Christmas party where we will raise a toast to some dear, departed old friends: our holding plates.