Pissing in the Harbor

A couple of years ago I reported on the Ft. Lauderdale Piss-Off for powerboats. There the objective appeared to be to make the most ridiculous air conditioning cooling water discharge, in particular being at the greatest height and with the furthest trajectory, while producing the greatest audible nuisance along the way. The desired effect was seemingly to fill up the neighbor’s dinghy or piss on to the dock and drench a boat shoe or two. Last week at the Annapolis Sailboat Show it was the blow-boats turn, where some interesting and innovative solutions were to be found.

The objective of the cooling water discharges on these sailboats seems to be quite the opposite to the powerboats. Now the trend appears to be to install mini cowlings over the discharge thru-hulls in order for them to be noticeable in various ways, and the fact that this seriously restricts the water flow seems to be of secondary concern to the desired visual and audible effect.

1) Visual effect: This is a good one. The cowling directs the water down the surface of the hull giving a real pissed-on look, and with corresponding color for a very realistic effect. 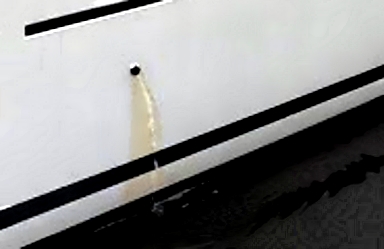 2) Audible Effect: There’s nothing better than the tunnel under a catamaran for amplifying and echoing annoying noises, and this cat piss is a good example. The air conditioning control on this one would be best set for the pump to run continuously so as not to have the pump start up in the middle of the night and freak out the occupants.

3) Bragging rights: “I’ve got a Triple-Pisser, how about you?” This is a nice neat installation, but seeing as they all piss together at the same time fed by the same pump, you’d think that the builder would have used just one large discharge instead of three small ones. You would, wouldn’t you? 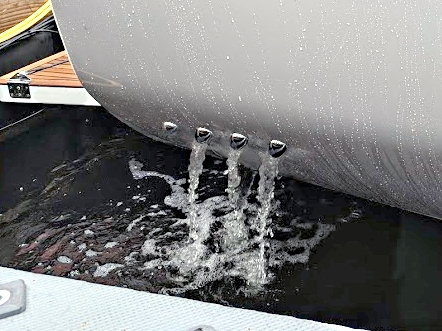 4) Stealth: This is the absolute opposite to the powerboat aim of making as much noise and inconvenience as possible from your air conditioning discharge. Here the boat builder is sacrificing the basic purpose of an above waterline discharge, i.e. that you can see and monitor water flow, in favor of the stunning visual effect of, well, nothing really. Maybe it’s for when you sneakily want to keep your cool when you’re in an air conditioning-free zone. I’m sure there must be air conditioning-free zones somewhere. Europe maybe?

5) The Perfect Pisser: It’s quiet. It won’t fill up your dinghy or splosh onto the dock. It’s somewhere where you can see and monitor it, and it’s of a size that gives a nice flow and not a pin-hole power-washer pisser. It would have been nice to see it right in the boot stripe mind, but that may be the result of hull coring or stringer placement. A tad old-fashioned? Maybe, but sometimes the old ways are the best ways. 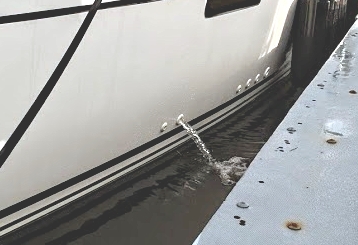 And while we’re on the subject, a quick word on how some boat builders manage to mess up the simple task of feeding multiple air conditioning units from one sea water pump. The physics of water-cooled air conditioning dictates that the cooling water takes away the heat removed from the cabin, and so the water exiting the unit is warmer than the water entering it. And the warmer the water entering the unit, the higher the pressures and subsequently the power draw, and the higher the strain on the compressor.

Keeping all that in mind, it should be pretty obvious that we want to feed each unit with the coolest possible sea water. Then why do some boat builders insist on feeding multiple air conditioning units with sea water in a series-plumbed fashion; i.e. daisy-chained from one unit to the next? In that configuration, the first unit in the chain gets nice cool sea water, but subsequent units are supplied with water that has been pre-heated by the previous units. The unlucky one that drew the shortest straw and is last in line is then left gasping and straining from having to work with excessively high cooling water temperatures. Come on boat builders, you can do better than that!

And don’t think you can make up for it by having a bigger pump and more water flow, ‘cos it don’t work like that. All it takes is a manifold after the pump discharge to split the supply to each unit, and then each discharge fed to either individual thru-hulls, or coming back together in another manifold and to a single thru-hull, as not seen in 3) above.

Now for the Powerboat show here in Annapolis. I wonder what their designers have been up to. Maybe someone’s using the air conditioning discharges to flow through an infinity pool on the aft deck, heating it along the way. No, no! I was only joking!