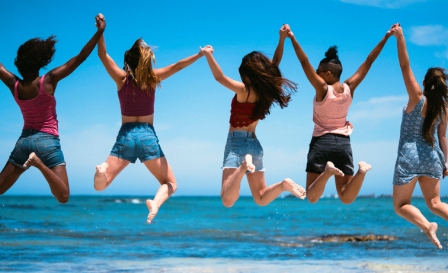 Continuing on the theme of the previous blog, regarding wiring individual batteries in parallel to make a higher capacity bank, now we can look at the best way to wire them up.

I included a teaser graphic in that last blog that showed two batteries wired in parallel and with the two main cables, one positive and one negative, both connected to one battery. I expected a flurry of comments on this, but to my surprise received only one. Mr. D said that the configuration shown would result in uneven current draw from each battery, resulting in greatly reduced cycle-life of the first battery in line. Is that so?

And if so, what is the best configuration? What are the alternatives?

Yipee! Time to put on the testing hat once again.

For my testing I connected five brand new Group 31 batteries in parallel with equal length straps. The first set of tests was with Firefly AGM’s, followed by identical tests with RELiON lithium iron phosphate (LiFePO4) batteries, as I was curious to see if there were any surprises with them.

The banks of five batteries were connected by power cables to an inverter that powered a 1,500w heater, resulting in total current draw of 120-130 amps. The positive connection on each battery was extended by a short strap that was just long enough to be able to get the clamp of a DC clamp-on ammeter around it. That way I could record what amount of current each battery was contributing to the total. Then four tests were made, with the power cables connected as follows:

The battery banks were fully charged before each test, but charge data was not recorded. 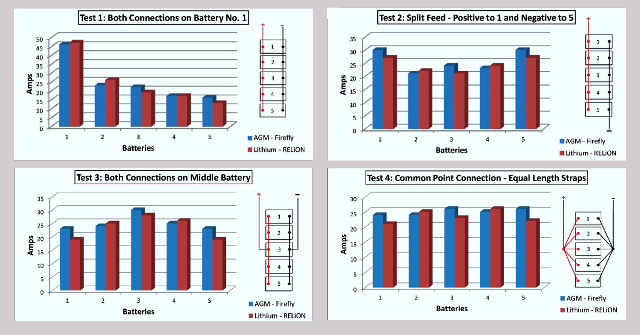 Conclusions: Obviously, connecting both power cables to just one end battery is not the best approach. The first battery contributed about twice as much current to the total as the next one in line, so that first battery in line will be worked much harder and will have a greatly reduced cycle-life compared to the rest.

Splitting the connections to opposite ends does improve the situation somewhat, as does having them both on the middle battery. As can be seen, the only way to evenly share the load between all batteries is by connecting each one to a common point where the power cable connects also. This will also facilitate individual fusing for each battery by using a fuse block as the common point. See here on www.bluesea.com for a good example.

Now that’s been settled that, it’s almost time for me to don shorts and sunscreen and head for the Miami International Boat Show. Come on by and say hello if you’ll be there too. We’re in Tent A, Booth A252.