They're out there somewhere, but where?

Has everyone got their face-masks on out there? Have you washed your hands recently? Are you staying in place unless it’s absolutely necessary for you to go out?

What strange things to be asking, but these are strange times, and some folk just don’t seem to be getting with the program. Maryland, along with many other States, is under a Stay-at-Home order and it is recommended that if for some reason you are out of the house, then you should have something covering your mouth and nose. But judging by the actions of the people I see out on the streets in my corner of Annapolis, this advice seems largely to have fallen on deaf ears.

In fact, there seems to be an overall lack of comprehension of the gravity of the situation, with smiles and laughter in abundance, and cheery waves between dog-walking parties. I know we should all keep our chins up and keep smiling, but I suspect things will change rapidly as the situation deteriorates and some of those we know and love are smitten and succumb. 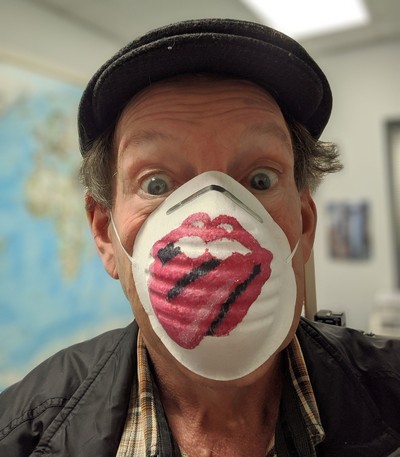 Any smiles from yours truly and his spouse are hidden behind the face masks that we’ve taken to wearing outdoors, even when in the car, and it’s hoped that my homage to the Rolling Stones will be taken as a defiant tongue-out to the virus. It’s all about being prepared and fearing for the worse, and to that end we should all imagine that, as unsociable as it may seem, everyone we encounter has the virus, and ourselves also.

All this reminds me of the level of preparedness required by boaters for a more predictable type of disaster – hurricanes.

In my first season running a sailboat in The Caribbean I was faced with the dilemma of an approaching hurricane out in The Atlantic. It was September after all, so not unexpected, and it was forecast to eventually veer northwards and again not bother St. Lucia, “like they always do” I was told. But still, this was new stuff to me, and although I’d weathered storms in the English Channel and The Atlantic, hurricanes were a new threat I’d yet to encounter.

So, I headed to Marigot Bay, which is an idyllic hurricane hole, and found a chum of mine at the charter fleet busily moving boats from the docks into the mangrove swamp. I asked him if he really thought this thing would actually head in our direction, and he explained that with so many boats to take care of, they couldn’t take any chances although he thought it highly unlikely it would make landfall in that little corner of paradise.

I followed suit and moved the Swan 46 into the farthest corner of the bay where I dropped two anchors out front and ran stern lines to the stoutest mangroves I could find. I was informed that this was the best form of hurricane mooring, as the mangroves act as springs and shock absorbers if things start to get lively. This was not an easy or pleasant exercise, in the September heat, in a windless, jungle environment, but once accomplished I felt a strong sense of satisfaction, and that I was ready for the worst.

My move seemed further vindicated when, one by one, other cruisers crept into the edge of the swamp and moored up, so that by the end of the day all available spots were taken in the mangrove mooring. Obviously there had to have been some new reporting on the hurricane’s projected path that I’d missed, so I was relieved to be in company with those with more up-to-date information.

But us hurricane-holers were not completely alone, as was soon evident once the sun started sinking and the inhabitants of the swamp materialized – mosquitos. Not just a few, but a mass invasion. It was as if someone dumped a truck-load of them up on the hills, aiming them at the sitting targets below on their boats. No sundowners in the cockpit that day, not a chance, just time spent hunkering down below hiding out from the swarm.

Later on, once it was dark and the mozzies had retreated, I headed for the bar at the hotel where I found many of my new swamp neighbors taking refuge. One sidled up to me and asked when I thought the hurricane would hit, but I confessed that I really had no updated weather information, but was relieved to be in a safe spot and in good company.

Oh dear. This was not what they wanted to hear. Apparently, they had all been keeping in touch on their radios out in the anchorage, and when they saw the Swan skipper heading into the swamp, they assumed he must know what he was doing, so they followed. They made it perfectly clear that they were less than thrilled to be stuck in such a hell-hole for no good reason, and the mangroves emptied out quickly the following day when it was obvious that the threat of imminent destruction had passed.

There’s another aspect of this new Covid-conscious lifestyle we’re living right now that brings back other happy(?) memories of boating in The Caribbean. This is the newly-learned ritual of wiping down everything bought home from the store, or picked up, or delivered, with some form of antiseptic before taking into the house or boat. You are all doing that, aren’t you?

Sitting on the back steps of my home the other day wiping down bottles, cans, etc., reminded me of sitting in a dinghy in a Caribbean anchorage somewhere with a boat load of supplies, dunking and wiping everything in the drink before loading them on board. This was a vitally important chore practiced to hopefully ensure that no cockroach eggs got stowed away to become future unwelcome passengers. Likewise, cardboard packaging was never allowed anywhere near the boat, because if just one or two of those little buggers got by ...

Once this all blows over, I’m betting that barbers and hairdressers will be exceptionally busy. Or will they? Maybe by then we’ll have got past the difficult stage of unruly, straggly hair, and we’ll emerge from our bunkers in a scene reminiscent of a 60/70’s pop festival.