We’re getting a lot of inquiries lately asking for the starting current figure for the compressors in the various air conditioners Coastal Climate Control offers. Why is that? We guess it is because increasing numbers of boaters and installers want to run air conditioners from small, often portable, generators, or from inverters, and they are trying to match the compressor load to the generator/inverter output. Let’s first take a look at what this starting current is all about. If you’re not interested in the technical mumbo-jumbo skip to Part 2.

Electrical motors powered from single phase alternating current (AC) have one big dilemma, and it’s because the current is alternating between positive and negative. If no provision is made to encourage it to do otherwise, the rotor of the motor will just sit in place and buzz without rotating when power is supplied. To overcome this little shortcoming we have to provide some means of kicking the rotor off in the right direction, and we do this with the help of a second winding in the motor called, appropriately, the Start Winding. The main winding is known as the Run Winding, and the Start Winding has poles set between the poles of the Run Winding. On small motors like fan motors this is often all that is required to encourage the motor to start and then rotate in the right direction, but larger motors require more help. Large motors, and especially compressors that have to do a lot of work by compressing a gas while also trying to start, need something extra to give the rotor a decent kick.

Connecting a Start Capacitor in series with the Start Winding has the effect of energizing those poles slightly ahead of the poles of the Run Winding, so enabling the motor to start and rotate in the correct direction. But a big kick requires a big capacitor, and that brings with it a big problem: Start Capacitors cannot be left in the circuit once the motor is up and running or there are likely to be disastrous consequences.

There are numerous methods employed to disconnect Start Capacitors once the motor is up to speed, including special relays called Start Relays, centrifugal switches, and heat/resistance devices (PTC). 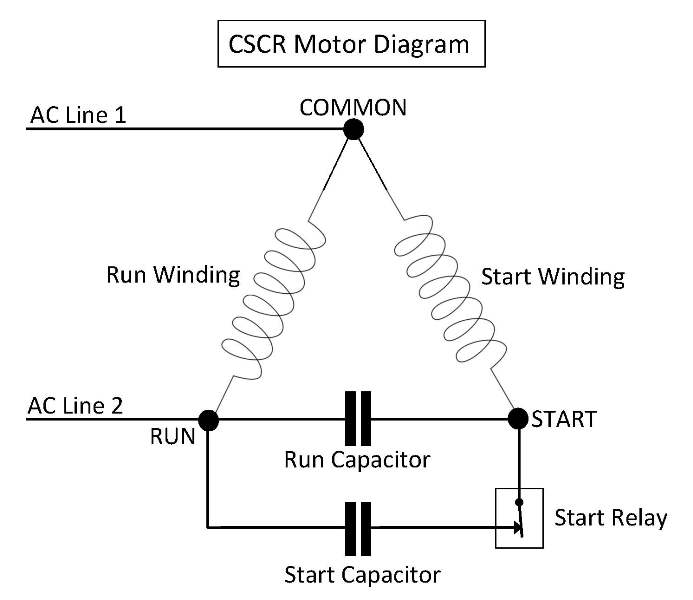 The rotary type of compressor we use in small and medium marine air conditioners these days require just a small nudge of torque to start the motor compared to earlier designs. Thanks to that, it is almost universal to find only a Run Capacitor connected to the Start Winding, with no Start Capacitor and no Start Relay or other disconnect device. This is referred to as a Permanent Split Capacitor (PSC) configuration. 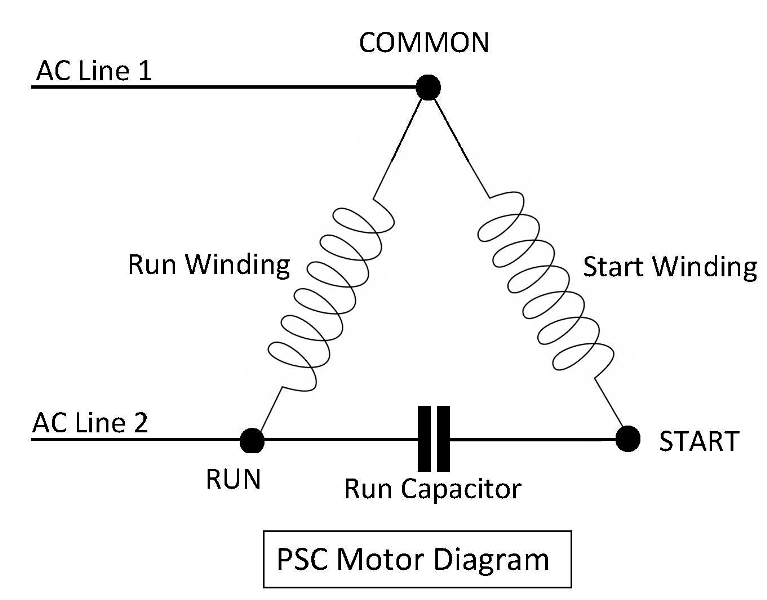 So with all that in mind, let’s get back to the question of the starting current.

Air conditioning compressors have two current ratings: FLA and LRA, and you might find one or both shown on the label. The FLA is the Full Load Amps which represents the current draw for just the compressor alone operating under certain specific conditions. The LRA is the Locked Rotor Amps, and is exactly what it implies. If the rotor of the motor were seized solid by a mechanical mishap, when power was applied the current draw would be as per the LRA for the few milliseconds it would take for the breaker or other over-current device to operate and cut the power.

Now let’s introduce another figure; the peak starting current, also called peak inrush current. This is the absolute maximum current present for only a very short space of time, typically for ten to fifteen cycles during the start sequence. The start envelope typically lasts about 250 milliseconds, or just one quarter of a second.

We can and do start and run this 4,200 Btu unit on a 600 watt inverter that has a 1,200 watt surge capacity. If we were to use the LRA number as a guide to decide on an inverter, we would have to select something with a higher surge rating of over 1,500 watts, and if we used the actual peak measured inrush current we’d need something with a surge rating of over 3,300 watts!

Then there are the 16,000 Btu air conditioners we tested that typically run at around 9-10 amps and have a peak measured inrush current of 72 amps. That size air conditioner will normally bog down a Honda 2000i portable generator on start-up unless an EasyStart soft start device is installed. With an EasyStart installed the peak inrush current is cut by over 50% to around 32 amps, and then the Honda handles it just fine. Watch our video demonstration here.

For some reason, the MarinAire 16,000 Btu unit we tested seemed to perform better on the Honda generator than from the mains! On mains power the measured inrush current matched other 16,000 Btu units we tested at around 72 amps, but on the Honda 2000i it consistently registered only 46 amps peak inrush. It also started and ran from the Honda without any soft start device installed, the only 16,000 Btu unit we’ve seen capable of such a feat. With an EasyStart installed the peak inrush current was down to a mere 27 amps, and the 2,000 watt generator hardly murmured during the compressor start sequence. Watch this video to see the proof. Quite impressive!

There seems to be no easy formula for sizing generators and inverters to run air conditioners. For many years the guideline used by planners and installers was to multiply the published running current by a factor of three and work on that as the maximum expected current. Maybe these days a factor of 2.5 times the running current would be more appropriate. Using that guideline, a modern 16,000 Btu air conditioner with a running current of 10 amps we would require a generator with minimum 2,875 watts capability (10amps x 2.5 x 115v = 2,875w).

But then these days we have the EasyStart, more efficient compressors, stronger generators and inverters, etc, so who knows what is actually possible. As Lyle Lovett says: “Where would you be if you didn’t try … you have to try”.

So go on, try it. What could possibly go wrong...